A Man Who Is Also A Fisher

On May 12th 2010 I was invited down to be on the Dave Gorman show Genius to see if Dave Gorman and his studio guests thought my idea was genius or not. On 10th June 2010 Craigyboy and I went down to London for the recordings. When we turned up we found out that the studio guests were going to be Tim Minchin and Alexei Sayle. In a format change from the first series, all the people at the front had submitted an idea, and could be asked at any point to share their idea. I didn't know they were going to ask me for my idea until Dave Gorman had mentioned my name.

Below are parts 1, 2 and 3 of the episode. My appearance starts around the 3:30 mark on the second video, but you can see me in quite a few of the wide angle shots due to having the brightest yellow hoodie on tv.

"All large crowds should have a Where's Wally lookalike in them". I believe I have the record as being the only person to appear on Genius that didn't find out if their idea was genius or not. 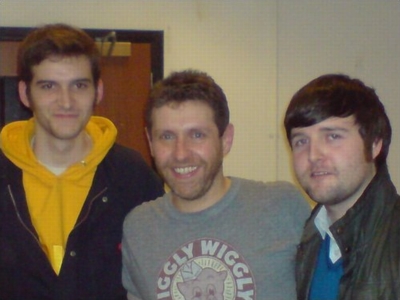 Us with Dave Gorman in the green room after the show.